The Vikings ruled Norway and terrorized our Christian neighbours from 800 to 1050 AD. Today their tracks are our top attractions. Our driverguides at Norway Exclusive are happy to introduce you to Viking history and culture in one of our luxury limousines or a comfortable minibus.

There is a renewed  and increased interest in the Viking age and the lifestyle and culture of these Northern “barbarians”.  This is perhaps due to TV-series and films which include quite realistics portrayal of the Vikings’ culture, social structures and way of life. In particular, they capture the nuances of Viking life. They depict not only its brutality, but also showcase the Vikings’ skills and craftsmanship, their society, and the way in which Norse mythology and religion played a role in every aspect of their existence. This attention to detail even extends to the wardrobe department. Although Vikings in cartoons are usually portrayed with horns on their helmets, real-life Vikings did not have these as they would have been completely impractical in battles.

The period commonly known as the Viking Age lasted from approximately 790 AD to 1066 AD. During this time, the indigenous inhabitants of Norway, Sweden and Denmark travelled across the globe. They went to to England, Scotland, Wales and Ireland, Normandy and Italy to trade, wage war and carry out raids. There are even traces of the Vikings in Iraq and evidence some Vikings acted as mercenaries for the Byzantine Empire. 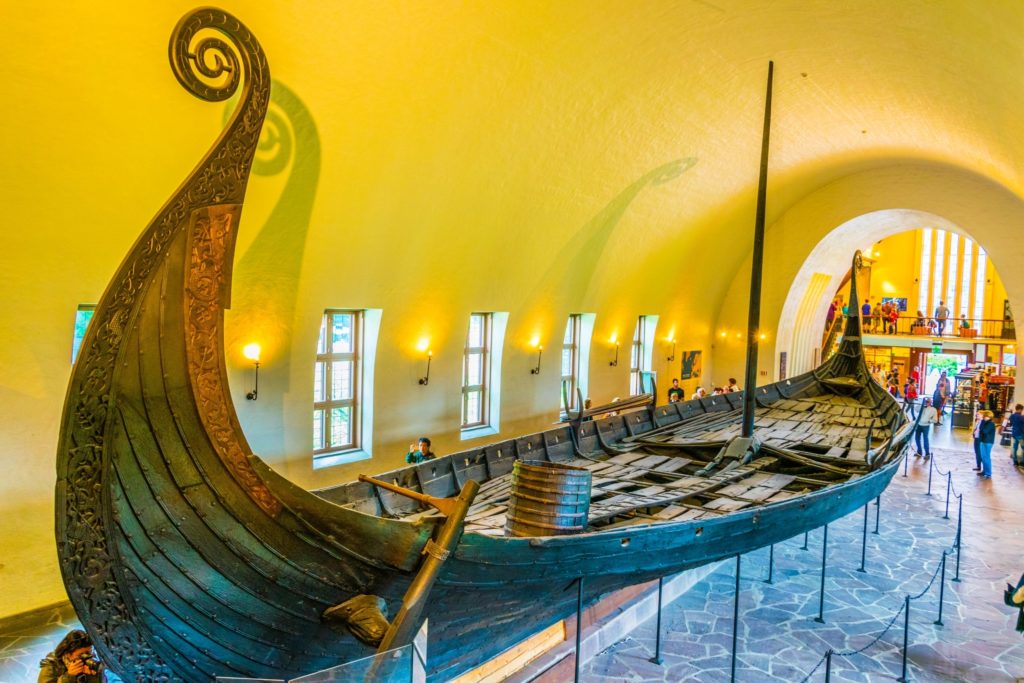 The Vikings’ infamous raids and trading voyages were possible due to their ingeniously constructed Viking ships, built to weather the rough north Atlantic coast. These ships evolved from smaller boats and vessels used for trans

portation in the fjords and great lakes of Norway. Extraordinarily, the Vikings developed a technique which they used for both small boats and ships of up to 118 feet, the size of the largest known Viking ship.

The ships were built to be extremely flexible, with a flat bottom which allowed them to surf across the waves much like RIB (Rigid Inflatable Boats) do today.  The ships had small draughts and could be rowed in both directions. This meant the Vikings could land on European beaches or sail easily up European rivers, carry out their raids and make a quick getaway. In and out like a flash of lightning. 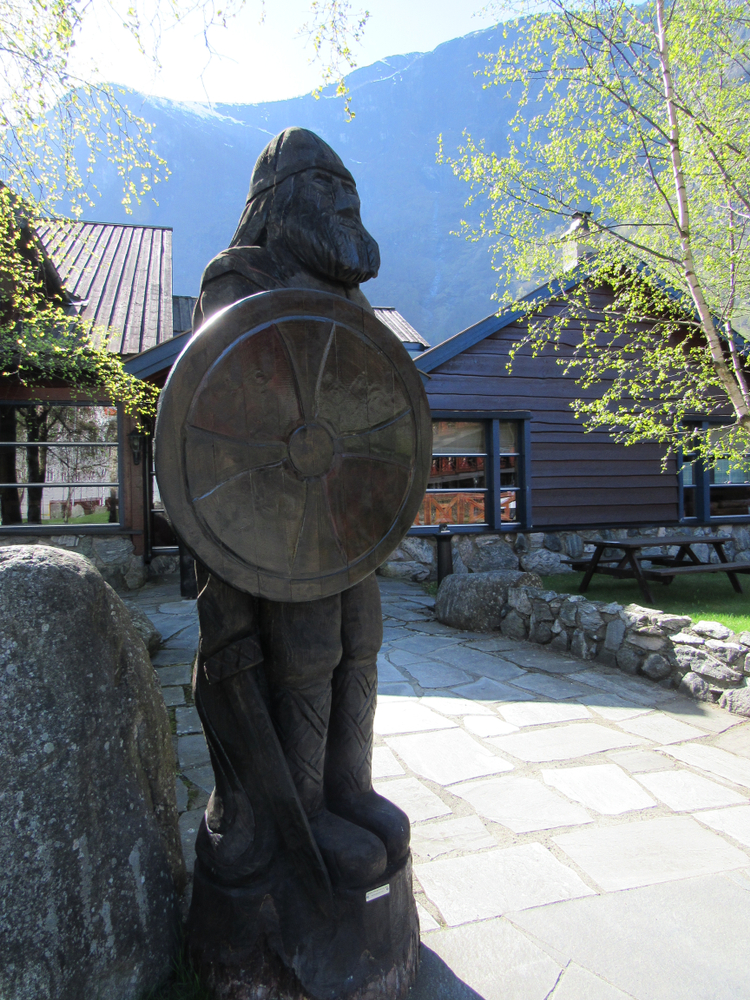 The Vikings’ weapons were less developed than those on continental Europe. That is, at least until they were able to steal more advanced weaponry from their victims. But their true strength was their ruthlessness and fearlessness, inspired by powerful religious beliefs. The Vikings believed in an afterlife, and not just any afterlife – those who died in battle would be granted eternal life in Odin’s Valhalla. Here they would have free access to food, beer, beautiful women and recreational fighting. This fanaticism and brutality meant the peaceful, unarmed monks in the Lindisfarne monastery were an easy target for the first known Viking raid in 792 A.D. Learn more of Lindisfarne.

There are important landmarks and traces of the Vikings all over Norway, and these are some of the country’s most popular tourist attractions. The ancient fjords of Western Norway remain exactly as they were during the Viking Age. It is easy to picture the majestic ships gliding through the narrow straits to the Viking settlements at the edge of the water. 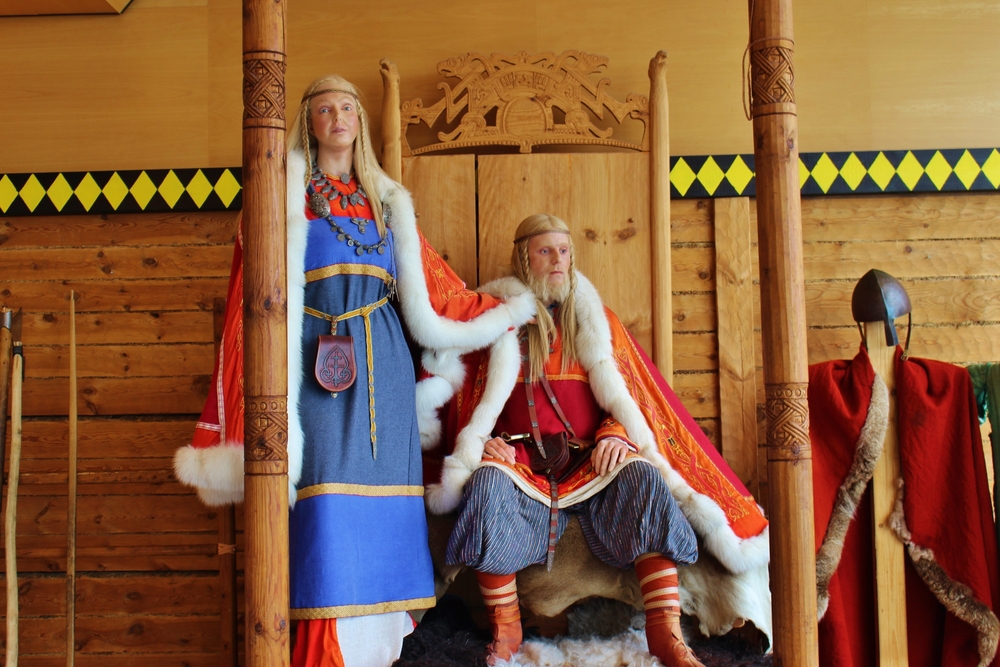 In towns such as Flåm and Gudvangen, there are Viking Age-inspired buildings and statues. There are also several fully functional Viking ship replicas in places such as Håholmen and Tønsberg. However, it is the original historical Viking sites and artifacts that inspire the most awe.

The Viking Ship Museum in Oslo is one of Norway’s most visited museums. It houses two original, almost fully preserved Viking ships called Osebergskipet (820 A.D.) (below), and Gokstadskipet (890 A.D.). It also houses as smaller boats, wagons, sleighs, tools, pottery and ornaments. To the delight of Norwegian archaeologists, the Vikings believed in life after death. Rich individuals would therefore be buried with all the items they had needed during their life on earth so that they could take these with them into the afterlife. This included the Viking ship itself, which served as a coffin for the person and their possessions. These two ships were buried in the earth that was so airtight the ships barely decayed. They could therefore be excavated almost fully preserved a thousand years later. Read more about the original viking ships in Oslo.

The Viking chiefs had enormous wealth from trade and looting. In the History Museum of Oslo you can see the most magnificent jewellry and ornaments from the Viking Age. 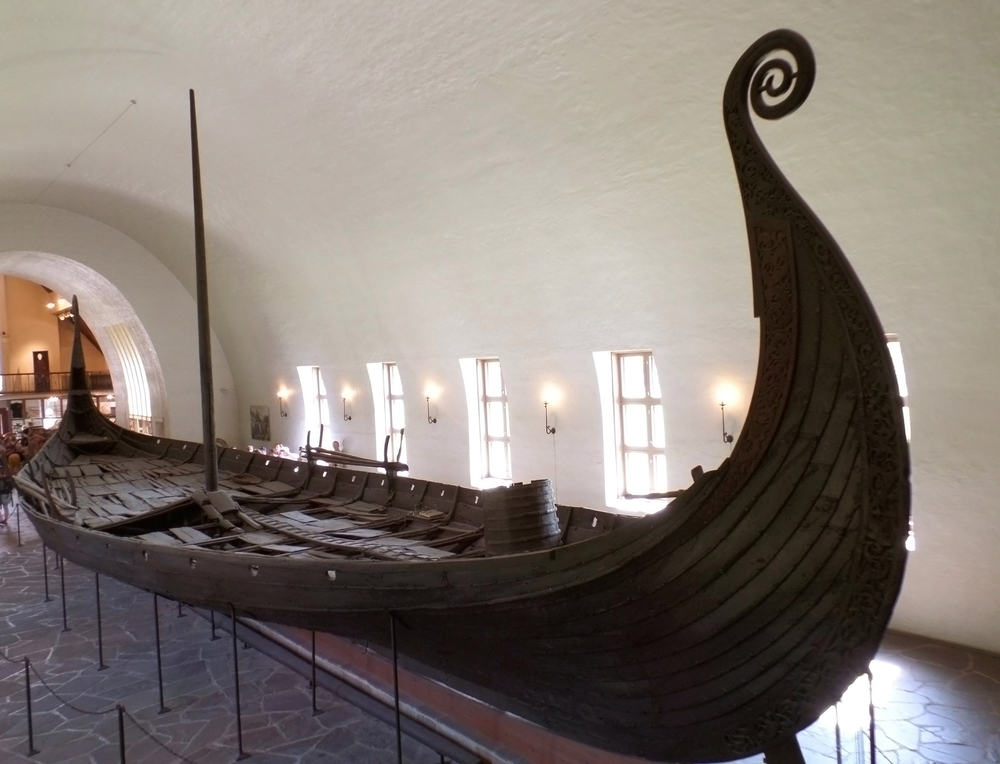 Is located near Tønsberg, about one hour from Oslo. It is one of the most important Viking settelements and has the largest collection of burial mounds from the Viking Age. The exibition center gives us a good insight in different aspects of the life of the Vikings. Read more of Midgard Borre Viking Center.

Gudvangen is situated in the UNESCO heritage fjord of Nærøyfjord which is derived from the Viking god Njardr. In the “autentic” Viking Village you meet vikings, see their houses, understand their arts and crafts and eat their food. Read more about The Viking Valley. Below: Daily life at the Viking Center 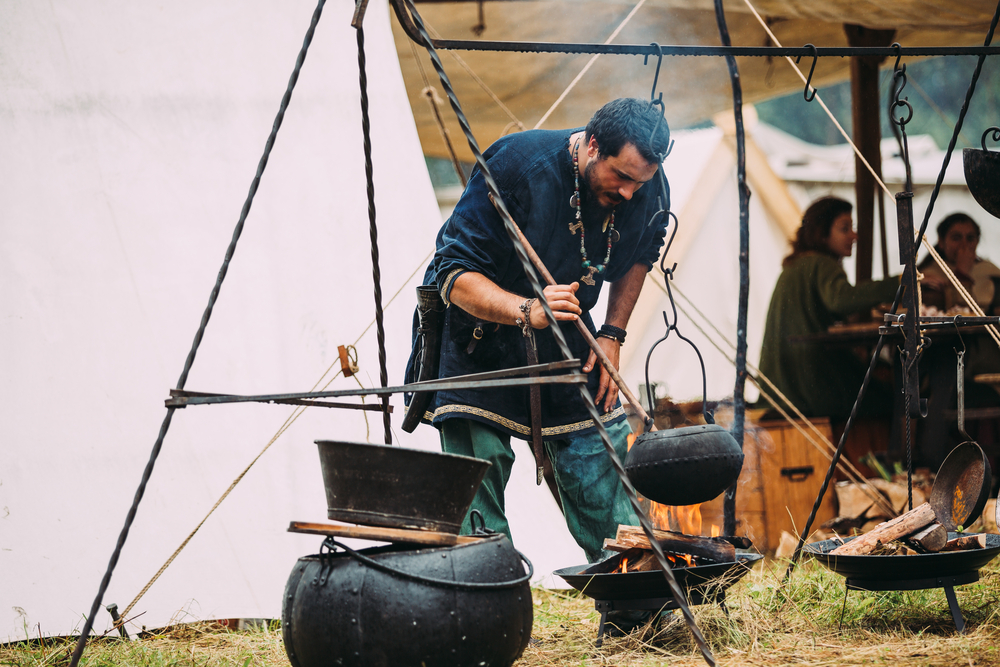 Avaldsnes near Haugesund was the seat of Norway’s first King Harald Harfagre. Many of the buildings from the Viking Age have been restored and there are still ongoing excavations. The farm is open to public including the typical “long house”. Read more of Avaldsnes Viking Farm.

In addition to the archaeological remains in the Nordic countries, there are also many traces of the Vikings around the world. This is especially true in places where there were Viking settlements or extensive Viking raids. There are Viking remains in places such as in York, Isle of Man and Normandy in France. Perhaps most renowned is the memorial to Leif Eriksson, the Viking Chief who discovered North America,  in the United States. You can read more about Leif Erikson here.  Below Christian Krogh’s famous paining Leif Erikson discovers America. 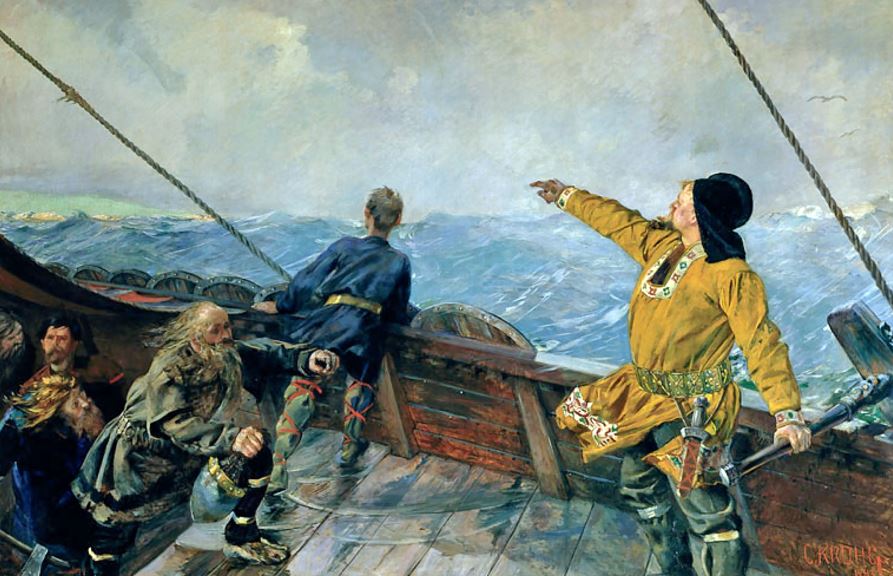 There are Viking festivals every year in Gudvangen in Nærøyfjord, Avaldsnes near Haugesund, and Midgard in Borre near Tønsberg. Actors perform a viking play every year at Giske and at Runde near Ålesund. Most famous of all is the annual outdoor reenactment of the famous Battle of Stiklestad near Trondheim. Norway’s patron saint Olav, buried in nearby Trondheim Cathedral, was killed in this battle in 1030.

How to visit our Viking attractions?

The Viking museum of Oslo is easily reached. Our recommended Oslo Sightseeing tour includes a visit here. The other attractions are spread around Norway, particularly in  the Western Fjord area.

Should you wish to visit more Viking attractions, we are happy to arrange a suitable itinerary in collaboration with our partners.  Our driverguides will drive you in one of our luxury cars and give you entertaining and informative commentary along the way.