The Urnes Stave Church (Stavkirke) is a hidden pearl in Norway. Our combined licensed guide and driver can show you this perfectly preserved 12th century stave church, designated a UNESCO world heritage site due to its unique snake carvings and cultural value as the oldest stave church in Europe. 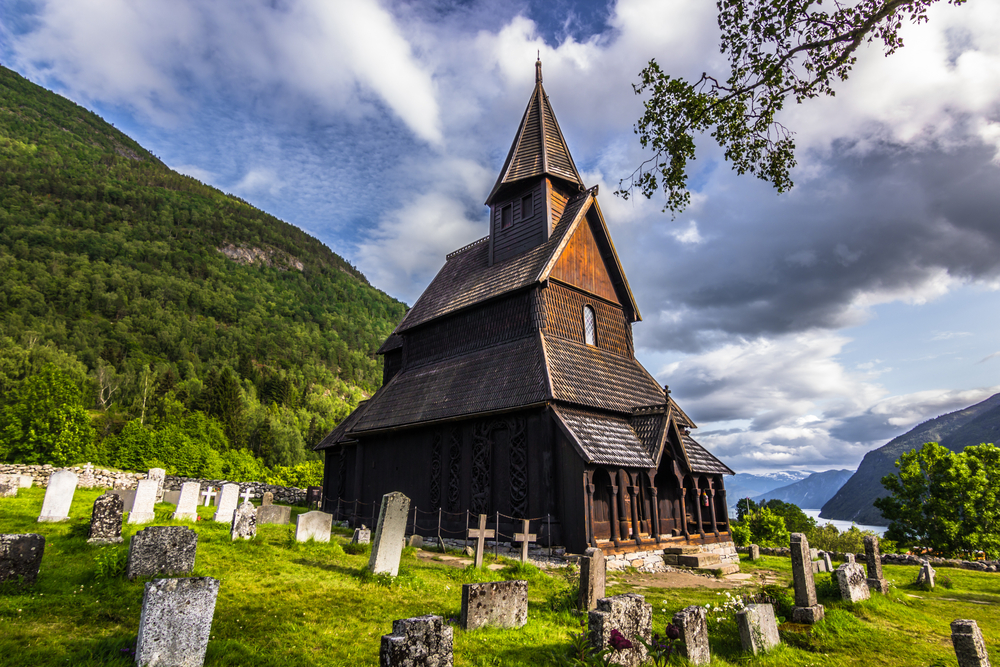 Christianity arrived in Norway in the late 900s A.D. and was made the official religion in 1020 A.D. Before this, the Vikings would worship the Norse gods at so-called “Gude hov”, tall, rectangular buildings with wooden beams. Although there is some debate about the origins of stave churches, some have argued that they derive their shape and construction.

Norwegian stave churches were built using walls made of wooden planks and large fir logs as posts (staves) supporting the roof, which meant they were extremely durable. Wikipedia has an interesting article on the stave churches and their construction.

Unfortunately, the wooden churches were very vulnerable to fires. There are currently only 28 stave churches left in Norway, of which Urnes is one of the most well-preserved. Built in 1170 A.D., it is also believed to be the oldest. Archaeologists have uncovered remains of three earlier churches on the same site, the earliest dating back to 950 A.D.

Urnes Stave Church as some interesting features including a richly decorated northern portal, where the wings feature snake and other animal carvings. A twelfth-century candelabra in the shape of a Viking Ship is displayed on the altar.

It is also beautifully situated in the village of Ornes on the eastern side of Lustrafjorden, surrounded by mountains. Visitors can see clearly how stave churches derived their inspiration from, and were built in harmony with, the Norwegian countryside. In the small villages, the church would be the most important building and a source of local pride. Timber to build the churches would be transported on boats up the fjords. These were the main transport routes before tunnels were built. Wikipedia also has an interesting article on Urnes Stave church.

How to get to Urnes or see other stave churches?

Urnes Stave Church is located in the village of Ornes in Sogn og Fjordane county in Western Norway. It is on the eastern side of Lustrafjorden, 5 km from Hafslo, accessible by a short ferry ride. Hafslo is 331 km from Oslo, about a five-hour drive. A bus also runs daily from Oslo and takes approximately 8 hours.

Should you wish to visit Urnes Stave Church we are happy to arrange a suitable itinerary in collaboration with our partners.

Our driverguides can make interesting stops and will give historical commentary along the way. There are also opportunities to take a scenic boat tour on the fjord. If you are particularly interested in history and architecture, we can show you other famous Norwegian stave churches, for example, the one in Lom in Gudbrandsdalen, Borgund in Lardal.

And there is also an original stave church at the open-air Norwegian Folk Museum in Oslo. This was moved in its entirety from the town of Gol. It is en route on our Oslo Sightseeing tour.