Just a few hours drive from Oslo our combined licensed guide and Chauffeur can show you to the UNESCO World Heritage town of Røros. It is renowned for its historical copper mines and its well-preserved 17th century town buildings and landmarks, giving visitors a true sense of what daily life was like in Norway four hundred years ago in a traditional mining community.

The town consists of over eighty traditional wooden buildings. As the local inhabitants (about 6000 people) still live and work in these buildings, a visit to Røros is like travelling back in time.

Mining in Røros began in 1644 and ended in 1977. Røros is also historically significant due to its proximity to the border with Sweden. The town was affected by a number of the military campaigns between Norway and Sweden throughout history. It was burnt down twice during the Scanian War in 1678 and 1679. It was also invaded by the Swedes in 1718 during the Great Northern War.

Mining in Norway began in Kongsberg, where silver deposits were found in 1629. A large silver mine was dug in the area which remained in operation until 1958. The King of Denmark-Norway, Christian IV, encouraged the development of mining in Norway. He promised great rewards for anyone who discovered minerals, and great punishment for anyone who did but failed to report it to the government.

In the 1900s, the mine suffered a number of blowbacks, including the global economic downturn in the 1920s and 30s and a fire in 1953. The mine closed in 1977, after the mining company suffered great losses due to a decrease in copper prices. It had then been in operation for a total of 333 years.

The interesting thing about Røros is the extent to which the copper mine was integrated into daily life in the town. The town dates back to a time when work consumed a large part of people’s lives. The livelihoods of all the inhabitants were dependent on the mine. Its coat of arms, which features the copper symbol and two mining tools, is everywhere – even in the old church, which was built from money donated by the mining company.

For the workers, life in the mines was notoriously difficult. Young children often began work in the mines as early as the age of seven, and the working day began at 4 a.m. Accidents were frequent. In addition, the climate in Røros extremely inhospitable: on the plateau, temperatures can fall to –20C in the winter.

was born in Røros, worked in the mine as a young child. He wrote a series of novels about the town and the lives of the mining workers. His most famous books were the four volumes of Nattens Brød (“Bread of Night”), about An-Magritt, a young woman working in the mines in the 1600s. Despite a constant struggle for survival she shows extraordinary strength and resilience.

What to see in Røros 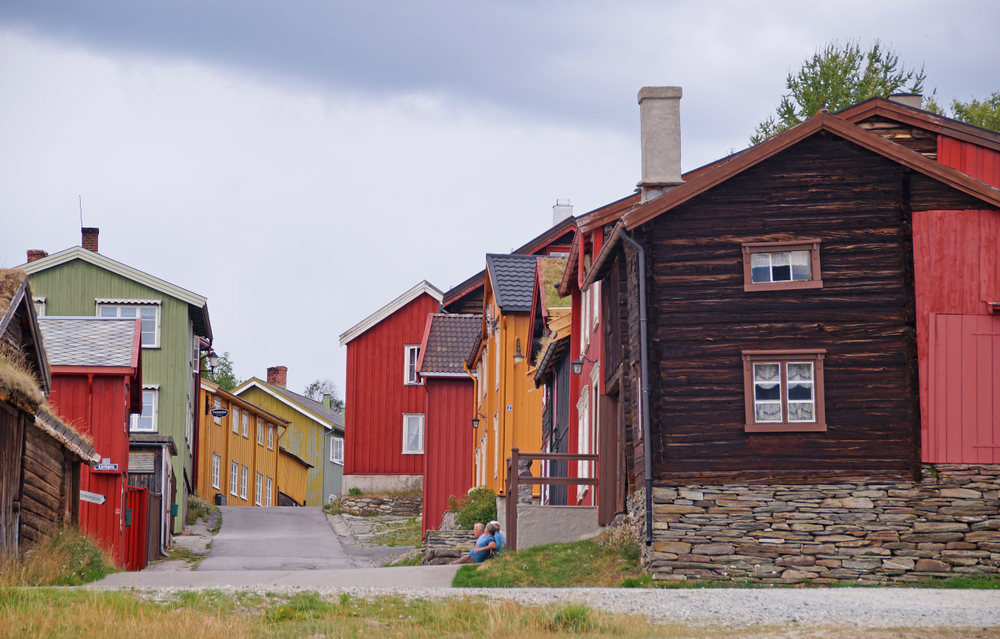 One of the most famous landmarks in Røros is the old mining church, “Bergstadens Ziir”, built in 1784. The church is open to visitors from 10 a.m. to 3 p.m. every day. For a genuinely authentic experience, tours are available daily at 3 p.m. down into the old Olavsgruva mine. The Smeltehytta exhibition gives an excellent illustration of the process of copper mining and smelting. It is open to visitors from 10 am-6 pm in summer (mid-June–mid-August) and 10-3 p.m. in winter.

Røros is located on a plateau, near the Femundsmarka National Park. This is ideally suited for winter activities such as dog sleighing, sledge rides, snowmobile rides and cross-country skiing. In summer, it is also possible to go kayaking, hiking or fishing. At Norwayexclusive we can organize such activities for you as part of our tailor-made guided tour. There is also a famous winter market every year in the last week of February. Read more about Röros on the town’s official web site.

Should you wish to visit Røros we are happy to arrange a suitable itinerary in collaboration with our partners.  Our driverguides will give you entertaining and informative commentary along the way.