The UNESCO World Heritage Site of Geirangerfjord is one of the most popular attractions in Norway.

History of the fjords

Norway was covered in glaciers up until approximately 10 000 BC. When the glaciers retreated, they left behind inlets along the coastline. These were then quickly flooded with seawater, creating what we now call fjords.

There are a total of 1200 fjords in Norway. Of these, Geirangerfjord and Nærøyfjord have been designated UNESCO World Heritage areas due to their outstanding natural beauty.

The fjords are famous in Norwegian and international culture. They form the backdrop in several Viking Age films and TV series and offer some of our most spectacular and breath-taking views. The area is also said to have inspired the scenery in the Disney Movie “Frozen.

The fjord is 15 km long, 1.5 km wide at its widest, and 700 metres deep at its deepest. The area which was designated a UNESCO world heritage site is 498 Km2 in size. It encompasses the fjord along with the surrounding area in the districts of Stranda and Norddal.

Two of the most interesting historical sights along the Geirangerfjord are the old cliff-edge farms of Skageflå and Knivsflå. The farms consist of original wooden farm houses perched on separate cliff edges on opposite sides of the Geirangerfjord. 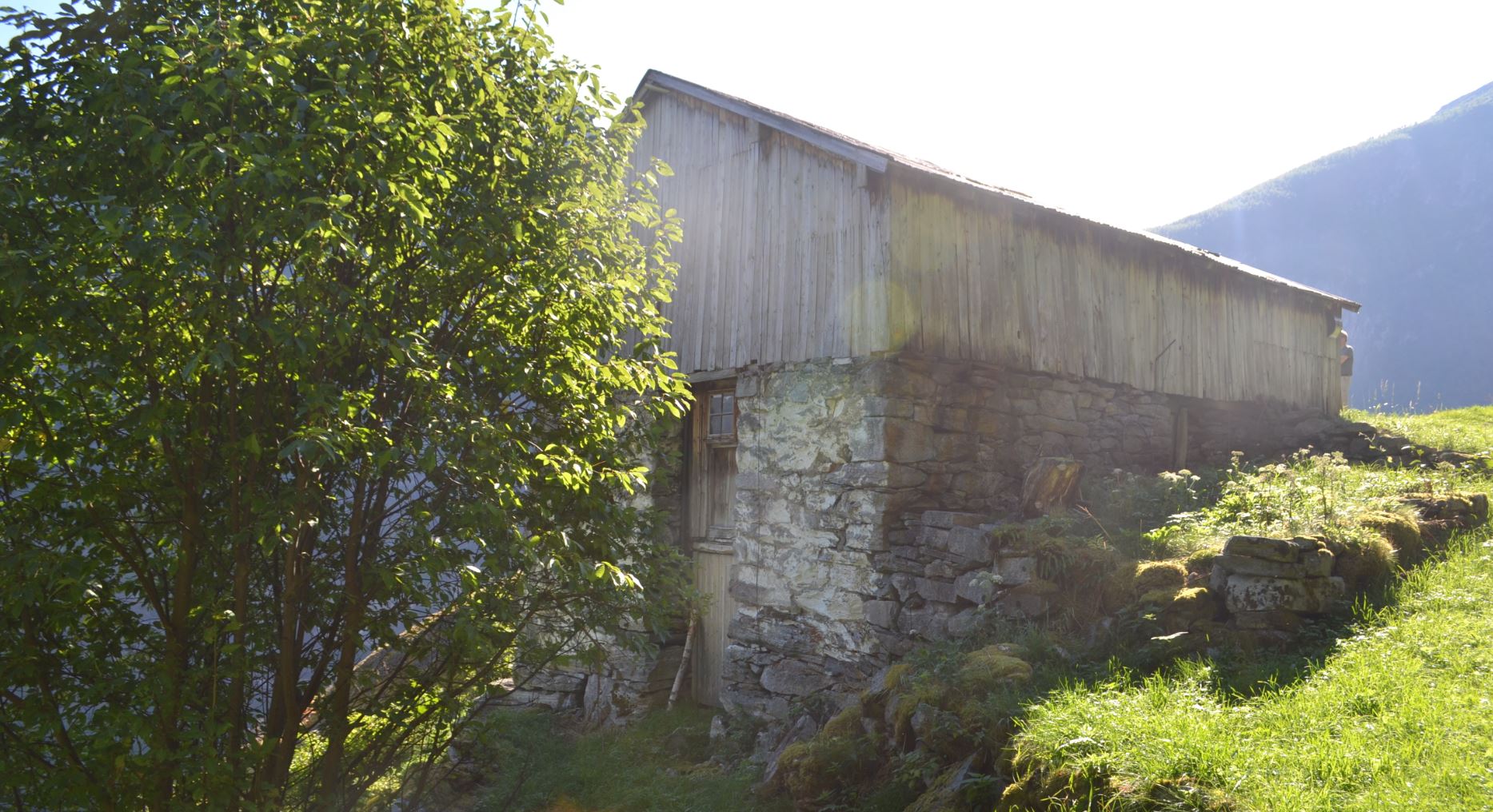 During the 1700s and 1800s land suitable for farming was difficult to come by for poor peasants in this area. The farmers had to exploit all the land they had available, including land high up in the mountains. This land was ideal as pasture for goats and enabled the mountain farmers to keep large herds.

To manage life in such dangerous locations, the farmers had to find creative ways to survive. The small narrow houses were often tucked into the mountainside. This was done to ensure that any avalanche from above would run over the houses instead of destroying them. About a hundred years ago, a great avalanche ran over a mountain farm in Oaldsbygda and took with it the top of the roof of the main building, as well as one of the residents, the family’s grandfather, who was asleep in his bed. However, the grandfather escaped unharmed, surfing in his bed on top of the snow. He was afterwards quoted in the local newspaper saying that when the avalanche stopped at the fjord, he simply grabbed his fur blanket and strolled back up to the house.

At the cliff-edge farms of Skageflå and Knivsflå, they had to be especially creative – to make sure young children did not fall over the edge, they would often play outside with a rope around their waists secured to the nearest tree. Food and supplies were brought up using a cable system.

Living on the cliff-edge by the fjord had at least one advantage: when the tax collector came to visit, the residents at Skageflå were known to pull up the ladder and ropes so that he could not come up to the farm.

Both Knivsflå and Skageflå can be visited by boat from Geiranger.

Geirangerfjord is home to some of the area’s most famous waterfalls. The Seven Sisters are seven thin white waterfalls draping beautifully down the side of the mountain and into the fjord. Because they are right next to each other, they look like sisters. Right across the fjord from the Seven Sisters is the large waterfall called “the Suitor” (“Friaren” in Norwegian). The Suitor waterfall has a dry area in the middle shaped like a bottle. According to legend, the Suitor proposed to all seven sisters but was refused – and therefore developed a drinking problem.

Another famous Geirangerfjord waterfall is the Bridal Veil (“Brudesløret” in Norwegian) – a long, flowing, almost translucent waterfall that looks like a chiffon veil.

There are several famous viewpoints of the fjord in the mountains surrounding the Geirangerfjord.

Flydalsjuvet Rock Viewpoint is approximately 4 km from the centre of Geiranger village, and consists of two large platforms with a gangway between them. The lower platform has an impressive wooden seat at the edge of the mountain, in which you can sit down, enjoy the view, and have your photo taken looking like the King or Queen of the Fjords.

By car, the famous Norwegian County Road 63 runs to Geiranger from Langtvatnet in Oppland County, and passes a road from which the mountain Dalsnibba, towering above the village of Geiranger, can be accessed via the so-called Dalsnibba Skywalk, a set of stone steps leading up to an impressive wooden viewing platform which offers some of the best views of the Geirangerfjord.

The route north from Geiranger also features the famous Ørnevegen (Eagle Road), a zig-zagging road which climbs 620 metres above the fjord. The Eagle Road Bend is a lookout point on the Eagle Road, with spectacular views of the fjord and the village. 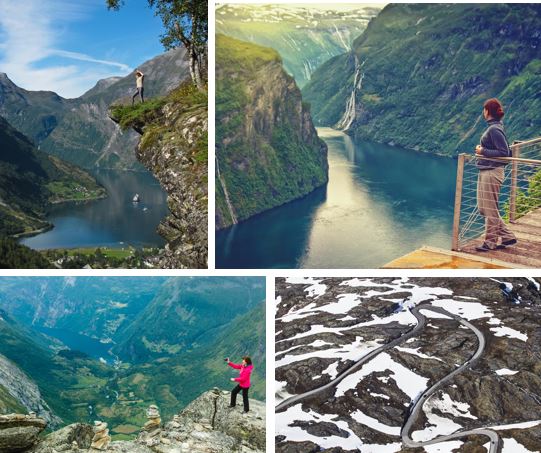 Further, after crossing another branch of the fjord with the ferry, on the County Road 63 includes the dizzying zig-zag route called Trollstigen (“The Troll Ladder”), with its dramatic views of the mountains and the valley below. Trollstigen is part of the final leg of the journey from Geiranger to the town of Åndalsnes.

District Road 60 which runs between the village of Hellesylt and the village of Stranda features an extroardinary lookout point at Ljøen, where you can observe the fjord from a concrete balcony with glass railings. Ljøen farm also has an atmospheric open-air concert stage where artists perform with the spectacular backdrop of the fjord and mountains behind them.

The Geirangerfjord is also famous for another reason: for many years, the villages of Hellesylt and Geiranger have been under threat of a major fjord tsunami. Åkernesrevna is a large crack in the mountain about 13 km into the fjord from Hellesylt. If the crack widens, geologists fear that a rock mass the size of 50 – 100 million cubic metres could fall into the fjord and cause a 30-metre tall wave.

Geologists are closely monitoring the area in order to identify any changes which might mean the rockslide is imminent. There is also an alarm system in place which will warn residents if they need to evacuate.

The 2016 movie “The Wave” is a fictionalised (and unrealistically dramatic) account of what could happen if the rock slide materialises. Local residents in Geiranger and Hellesylt are calm people with an excellent sense of humour – they may encourage you to have an extra drink or some more food in order to live life to the fullest “before the wave comes”.

Geirangerfjord is a seven-hour drive from Oslo. A public bus runs daily from Oslo Central Station to Hellesylt (7 hours). There are also several flights a day between Oslo and the town of Alesund (45 minutes). From here Geirangerfjord can be reached by car (a 90-minute drive) and bus. In the season there are also sightseeing boats from Ålesund.

A ferry runs several times a day between Hellesylt and Geiranger. The journey takes an hour and passes the waterfalls, as well as the cliff-edge farms of Skagefla and Knivsfla. Onboard audio commentary is given in Norwegian, English and German.

The best way of experiencing the fjord is by a private small boat or kayak. Both are available for hire in Geiranger and Hellesylt.

Should you wish to tour the Geirangerfjord area we are happy to arrange a suitable itinerary in collaboration with our partners.  If you wish to see the whole area, we recommend spending 3-4 days. Our driverguides will give you entertaining and informative commentary along the way. A visit to the area can be combined with a fjord boat tour and guided hiking in surrounding mountains.